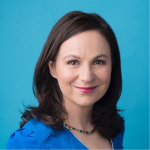 "From 1996 on, Valérie Bros held senior positions in public organizations, such as the French Treasury and the Ministry for Foreign Affairs.
She specialized in financial regulation and restructuration of sovereign debt within the Paris Club. She also represented the French State as the major shareholder in several Defense companies.
Advisor to French Minister for Finance and Minister for Foreign Affairs between 2002 and 2006, she then spent seven years in Brussels, Belgium, where she was responsible for Economic and Financial affairs and represented France in the Council of the European Union. In particular, she was in charge of competition and state aids, Eurozone and financial regulation, application of IFRS in the E.U., taxation and support to SMEs.
In 2014, Valérie joined Electricité de France, world leader in nuclear energy, first as senior Executive and BU Director in Enedis (DSO), in charge of concessions, electric mobility, and digital offers to design smart cities, then, since November 2017, as senior Director in the General Secretariat of EDF, in charge of business integration.
She is a member of the Supervisory Board and Audit committee of Framatome, a major player in the energy market and 14.000 employees worldwide.
Strongly committed to civic life and the promotion of Education and Defense, Valérie is notably a member of the executive committee of the Foundation ""Janson de Sailly"" and holds the rank of colonel in the French reserve Air force.
Valérie graduated from the most prestigious French schools (HEC, Sciences-Po, ENA) and Universities (master in law in the University Paris-Sorbonne). She is a Member of the French Court of Auditors."